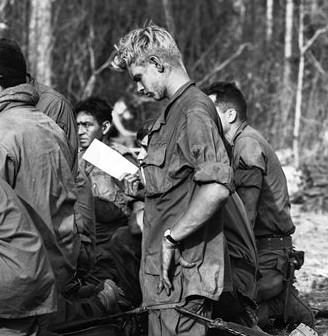 “I gotta get some sleep, Stamper,” Bobby Colston said as he set the small, black book onto the footlocker next to his bed. He fastened the mosquito netting from the inside before falling back heavily into his pillow. “We’ve gotta be on the chopper pad at zero six-hundred,” he drawled.

“What are you reading?” I asked.

“The New Testament,” he answered.

“You believe in God?”

“Yeah.” Bobby covered his eyes with his forearm, blocking out the light.

“I’ve got a New Testament with a steel plate in the cover,” I said. Reaching into my shirt, I pulled out the pocket-size book, turned to the inside cover, and ran my fingers across the black letter typeface painted on the brushed metal surface. It was the 91st Psalm:

“Thou shalt not be afraid for the terror by night…nor for the destruction that wasteth at noonday. A thousand shall fall at thy side, and ten thousand at thy right hand; but it shall not come nigh thee.”

I didn’t read the Bible all that much, but I found myself reading that verse over and over. I carried the small bible with me religiously, almost superstitiously, on every mission, just like Sergeant Thomas who never took off his gold cross. And though his recent death shattered any comfort that I drew from carrying the Bible around like a talisman, I had become even more obsessive about having it on my person, subconsciously feeling for it in the night, pressing it against my chest–longing for some assurance from God, praying he wouldn’t leave me alone in the wild, wouldn’t give my soul over to destruction, or my body to the merciless enemy like Thomas, Duran and the others on Foxtrot team. I wanted to believe the promise from the Psalms, but I felt more doubt than faith. I slipped the New Testament back into my top breast pocket and watched Colston drift off to sleep. At the very least, I thought, the steel plate might afford me a little protection.

“Have a good mission tomorrow Bobby,” I muttered, abandoning my ongoing attempt to reconcile the idea of an all knowing, all loving, all controlling God with the horror and waste of war.

All knowing? I wondered. If anyone needed access to higher knowledge and wisdom, it was the politicians who determined the events that led to our orders. They seemed lost in a quandary, making decisions that only drew us deeper into the quicksand. Wisdom denied.

All loving? I couldn’t feel it. If anyone ever needed the love of God it was we who were fighting in lethal combat, yet our hatred grew daily, like flames spreading through a firestorm, fanned by the winds of mortal passion and fueled by the souls it consumed. Love lost.

All controlling? Everything was chaos. If there really was a higher power whose throne is in heaven, who uses earth as a footstool, and who loves his creation, why, I wondered, wasn’t he preventing this bloodshed?

In the book, The Red Badge of Courage, Stephen Crane wrote these insightful words, “So it came to pass that as he trudged from the place of blood and wrath his soul changed.”

The Viet Cong and North Vietnamese Army were not the only dangers in Vietnam. Suffocating heat and monsoons, venomous snakes, scorpions, tigers, malaria, booby traps and storm-swollen rivers were all deadly. During the war, the US military sprayed 20 million gallons of chemicals, including Agent Orange, on the forests and farmlands of Vietnam.

And just as dangerous, was the question–that vague, sickening question that I could find no answer for–slowly forming in the hollow of my soul. The question that ravaged my mind and heart: Why? Why this much blood, God? Why my buddies, instead of me, God? Why am I still standing, and they’re all gone, God? Why did you let this happen, God?

‘Why?’ is the universal, existential question of war and it can drive men mad with grief.

Interviews with war veterans from all wars reveal deeply conflicted feelings about God in the aftermath. They feel betrayed by God, and wonder if He is impotent to stop evil. They question if God even exists or wonder if they are now so contaminated that they cannot be loved by a higher power.

When attempting to put the soldier back together again, like the King’s men working on Humpty Dumpty, doctors and psychologists focus first on the trauma, stress and the effects of threat to the human body. The effects of this is described as battle fatigue, shell-shock and PTSD. The newest term is Combat Stress Reaction.

At the time veterans returned from the Vietnam War, little was known about post-deployment stress effects on the body, and the havoc it can wreak on bodies and spirits. That has since changed. They now know that these are normal reactions because this is how the human stress system works. Yet the misunderstanding and stigma surrounding the effects of war still lingers.

Experts also now recognize that profound healing from trauma can take place through religion and spirituality, and that positive life change can sometimes come out of trauma or life crisis. They call this post-traumatic growth or adversarial growth. But science stops short of fully understanding the mysterious pathways of the warrior’s heart or what goes on in the chambers of his soul.

The answer to this mystery is found in the Creator who designed the mind, who knows the ways of the heart and plumbs the depths of the soul. And this Creator is not one who can’t be touched by human suffering and infirmity, but rather he is one who is so close to human suffering, and so acquainted with grief that he earned the name–a man of sorrows. God incarnate, the Creator of the Universe, laid down his life as a sacrifice for all so we could be reconciled to Him forever.

It takes a cure as traumatic as war itself, to nullify the damage, and restore the soul. The prophet Isaiah foretold of such a traumatic cure in the Old Testament:

Who believes what we’ve heard and seen?
Who would have thought God’s saving power would look like this?

Who has believed our message?
To whom has the Lord revealed his powerful arm?

My servant grew up in the Lord’s presence like a tender green shoot,
like a root in dry ground.
There was nothing beautiful or majestic about his appearance,
nothing to attract us to him.

He was despised and rejected—
a man of sorrows, acquainted with deepest grief.
We turned our backs on him and looked the other way.
He was despised, and we did not care.

Yet it was our weaknesses he carried;
it was our sorrows that weighed him down.
And we thought his troubles were a punishment from God,
a punishment for his own sins!

All of us, like sheep, have strayed away.
We have left God’s paths to follow our own.
Yet the Lord laid on him
the sins of us all.

He was oppressed and treated harshly,
yet he never said a word.
He was led like a lamb to the slaughter.
And as a sheep is silent before the shearers,
he did not open his mouth.

Unjustly condemned,
he was led away.
No one cared that he died without descendants,
that his life was cut short in midstream.
But he was struck down
for the rebellion of my people.

He had done no wrong
and had never deceived anyone.
But he was buried like a criminal;
he was put in a rich man’s grave.

When he sees all that is accomplished by his anguish,
he will be satisfied.
And because of his experience,
my righteous servant will make it possible
for many to be counted righteous,
for he will bear all their sins.

I will give him the honors of a victorious soldier,
because he exposed himself to death.
He was counted among the rebels.
He bore the sins of many and interceded for rebels.

5 Comments on “The Deadly Question”