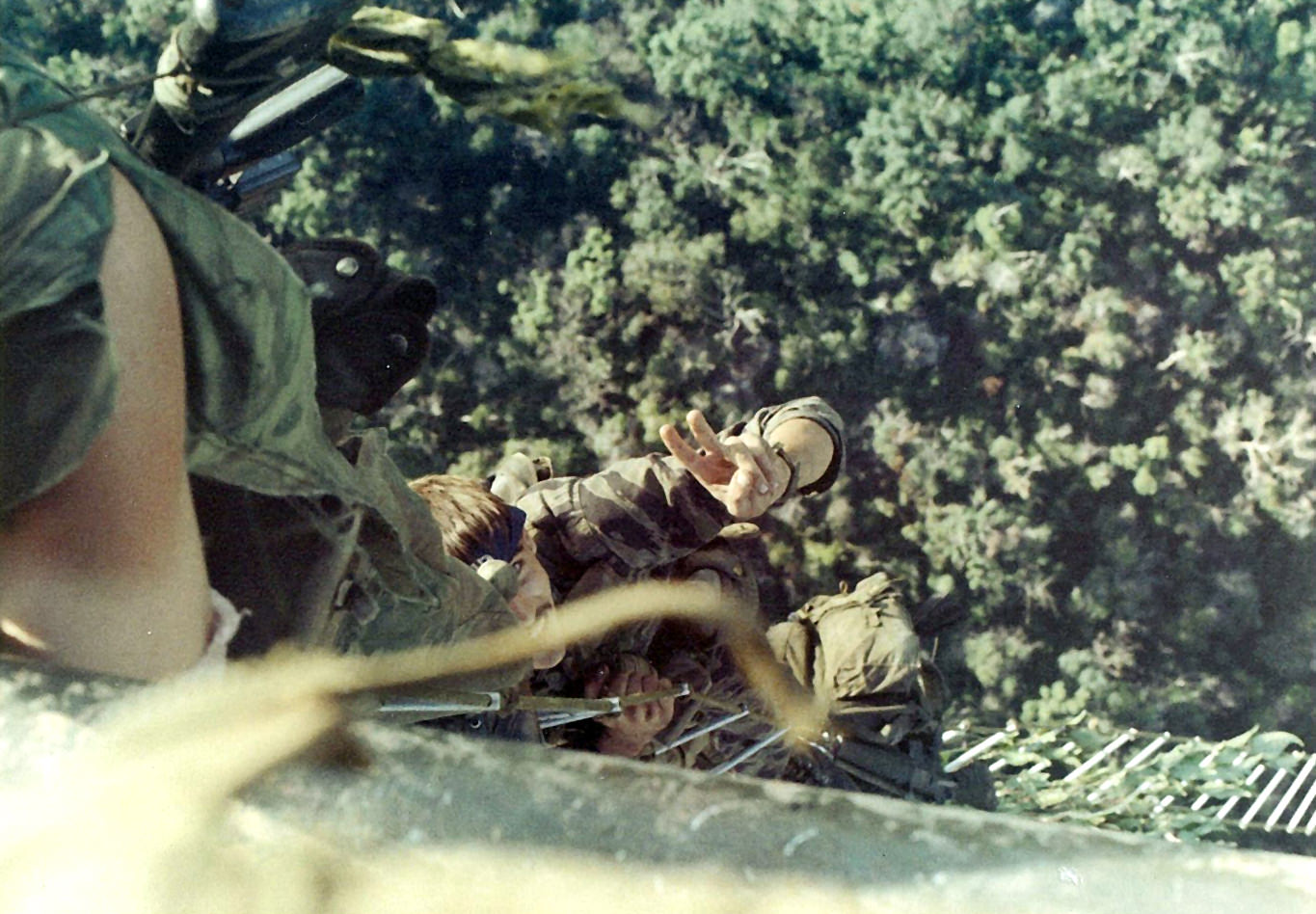 We squatted against the river bank with the two POW’s. They huddled against the dirt embankment behind us, eyes wide with fear, the father cradling his young son. The old man’s skin was leathery and shriveled and his teeth were stained black from chewing on beetle nuts. I judged him to weigh about a hundred pounds at most. The boy looked to be about nine or ten.

We had no intention of harming the peace-loving Montagnards and only needed them for information they could provide on the status and location of the enemy. Living in the mountains put them squarely in the path of the war and as a result, they knew information that could prove valuable to both the Americans and NVA. Because of this, they made great POW’s. Before walking into our trap, this pair of gentle souls had been living among their people–their only mistake was walking down that trail, that day, that hour. And now, after an exhaustive three-hour run to the river with the NVA in closing pursuit, they had been carted off to the only possible place of extraction. Flanked by ten fully-armed soldiers in camouflaged fatigues, they waited obediently at the water’s edge, hoping for deliverance, fearing the outcome.

We could hear the choppers approaching as Sonny talked them toward our location. A minute later, the Hueys rounded the bend in the river, flying twenty feet above the water. I pulled my signal mirror from my pocket, sighted in the lead helicopter through the hole in the center and wiggled the glass back and forth, reflecting the sun into the windshield of the chopper.

“Foxtrot, this is Casper, I got a shiner, is that you? Confirm over.”

“Affirmative, Casper. Looks like you’re going to have to pick us up in the water, unless you can see any better LZ’s, over.”

“Negative, take a swim, we’ll meet you in the middle.” We waded uncertainly into the roaring current as the helicopters descended toward us.

Hip-deep in the cold water, we moved slowly and deliberately toward the choppers that were now hovering in a stationary position over the center of the river. Spray swirled around us from the rotor blast of the lead ship. The stones under our feet slipped and moved as we strained to keep our balance against the strong, hard current. Cupit reached the skid first and grabbed the young boy by the arm, helping Hartman shove him up and into the chopper. Freddy climbed aboard behind him. The skid of the helicopter danced a foot from the water, bobbing up and down as each man grabbed hold and struggled to get up into the chopper. The doorgunner and crew chief reached down and one-by-one pulled Cupit, Bobby and Jim from the current. With extra weight, the helicopter tilted. The pilot corrected, breaking the hover and accelerating to a safe altitude. Four Cobra gunships were patrolling above, cutting a wide circle around our position, watching for  the enemy.

As Sonny, Jag and I neared the middle of the river, a second Huey descended to the same spot, hovering a couple feet above the turbulent water. One mistake and it would come down right on top of us. With the extra weight of the radio making it difficult to navigate the strong current, Sonny was fighting to stay up. Finally, he made it to the chopper, and both doorgunners got up out of their dropseat chairs to help pull him in. Jag was next. He handed his M16 to Sonny and climbed up the slippery skid, reaching for Reynaga’s outstretched hands. The pilot adjusted the hover, rising off the water momentarily, then slowly let the chopper back down until the skids were almost touching the surface. It took all his concentration to keep the ship in the air.

Banks carried the old man on his back, toward the aircraft, probing for solid footing in the bed of slick rocks. Crebs got a hand on Dave’s arm and helped him over to the ship. I was on the other end of the skid reaching out for him. The old man was petrified and clung to Dave’s neck like a barnacle. Banks took hold of the skid but his next step wasn’t solid and the swift water swept his legs out from under him. He instantly went under but managed to hang on to the skid, with only his hands and wrists remaining above the boiling water. Dave struggled for footing. Crebs reached down under the surface, grabbed his shirt and pulled with all his strength. Banks finally surfaced, gasping for breath. As he came up, the river broke the old man’s grip and tore him from Dave’s back. Completely submerged, he shot downstream. I instinctively grabbed for him and to my surprise, caught hold of his trousers. With one leg wrapped around the chopper skid, I struggled to hold onto the Montagnard, but I couldn’t keep my head above water, and his added weight immediately pulled me under.

I surfaced just long enough to catch a lungful of air, then went down again. I couldn’t hang on to him any longer, I had to let him go or we’d both drown. Just as I was about to release him to the mercy of the raging river, Dave reached out, grabbed the old man by the shirt and with our combined strength, we were able to lift him out of the water. He gasped repeatedly, sucking in deep lungfuls of air. Crebs worked his way over to us and threw his arm around the Montagnard’s waist, pushing him closer to the open door. Jag reached down to help, and finally we all lifted him into the ship then pulled ourselves aboard.

The gunships continued their protective circle as the Huey rose into the sky and away from the threatening water. The pilots set a straight course for LZ  English.