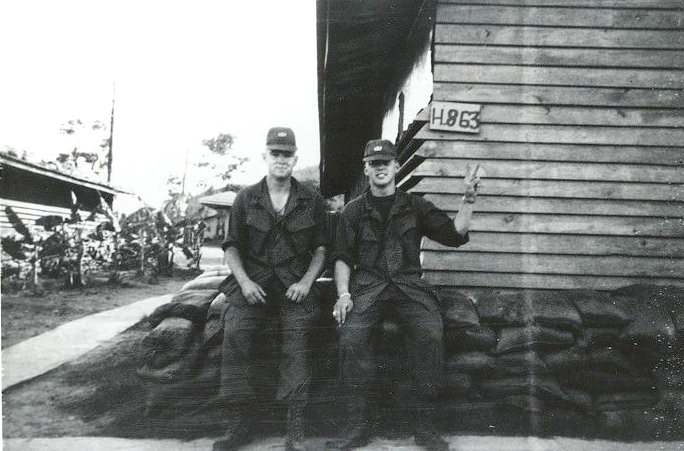 It was not an easy climb. Halfway up the hill, the ascent was nearly vertical. Jim Glenn and the rest of Alpha team, were gradually inching up the mountain above me, carrying their rifles in one hand while pulling themselves upward with the other hand, grabbing fistfuls of grass and shrub. I paused, wrapped my arm around a tree and shifted my footing in the soft, fern-covered soil, tearing the delicate ground cover and causing a miniature landslide as the dirt gave way under my weight. My feet dug for traction until I found solid footing on a rock just below the surface. I rested, waiting for the company of men below to catch up. The lieutenant led his winding column of soldiers up the hill toward me, following our freshly made trail. He stopped and looked up. The second we made eye contact, I moved on, climbing upward.

I caught the team near the top, and sat down to wait for the infantry soldiers to close the gap. Loud voices, breaking branches, and loose rocks clattered down the hillside. Jim asked with a look of wonder, ‘Why don’t we just send them an engraved invitation?’ I shrugged my shoulders in agreement.

After a few minutes, the company closed ranks. We continued on, leading them toward the hidden complex. Breaking through the brush, we discovered a familiar footpath. Wally wasted no time and headed down the hard-packed trail, cutting across the face of the hill in an angled descent, as each soldier stepped out of the brush to follow him. Flowing down the hillside like a long green snake, we focused in search of our prey. At times I was sure I recognized the landscape, yet most of it felt uncharted–two square miles of jungle had been pounded relentlessly for three days with B52 strikes and heavy artillery barrages in preparation for this search-and-destroy mission. The bombardment had reshaped the landscape, shearing the trees off at the base, replacing hills with craters, and shredding the once-lush foliage to pulp.

The narrow trail led gently downward across the mountainside, then wound around a bend and eventually leveled off into a burned-out clearing. We cautiously entered the dark ground, and spread out laterally, looking for signs of the enemy. A broken clay pot lay in the ashes. I swept it aside slowly with my foot. Jim and I stood in the center of the wide camp, looking it over as we waited for the lieutenant. Four large round scorch marks on the ground marked the place where straw huts once stood. We strayed toward them across the flat sooty expanse, and slowly began to recognize the base camp we had torched a little over a month before.

The lieutenant entered the camp with his platoon. We fanned out in a wide single line and began sweeping our way down the easy slope, through the tattered forest. Suddenly, a firefight broke out from the other side of the company. One of the squads had met with small-arms fire.

“Bunkers!” a voice echoed through the trees. Two squads rushed toward the gunfire to help. A second platoon of men moved up behind them, while we continued our sweep to the left. Jim Glenn and I walked side by side, with our weapons ready.

“Over there!” Jim said, pointing to a pile of brush ahead. We carefully approached a camouflaged bunker. Cradling my M16 in the crook of my arm, I slipped a hand grenade from my ammo webbing. We neared the edge of the dark hole with slow, cautious steps. My stomach began to flutter. The strength in my legs began to falter, growing heavy, as if my boots were filling with concrete. My body resisted as we drew closer to the danger. Willing myself forward, I held the frag tightly in my right hand, with the lever firmly depressed. I eased the pin loose, and let it fall noiselessly to the ground. I tossed the grenade into the black opening of the bunker–the spoon flying off with a twang. We turned to sprint away from the four-second fuse while a thundering explosion shook the ground with a belch of dirt and smoke. We picked ourselves up and moved toward a second bunker. My blood was pumping hard.

“Fire in the hole!” someone yelled through the trees. Another explosion, and the ground vibrated under our feet as a shock wave rolled beneath us. We were standing right in the middle of a bunker complex, directly over an underground maze of tunnels. The infantry unit quickly and systematically began dropping grenades into the tunnel entrances. “Boooom! Boooom! Boooom!” Each blast sent powerful concussions through the underground hallways, while VC scrambled through the dirt corridors beneath us in search of another exit.

“Boooom!” Another explosion, and Jim and I hit the deck as the second grenade detonated, destroying the camouflaged dirt mound with a geyser of dirt and rocks. Some thirty yards to our right, two soldiers moved up to a smoking bunker, laid down on their bellies, reached deep into the hole, and pulled a limp body over the edge and into the light. The young Viet Cong soldier, dressed in black shorts and a smudged, khaki-colored shirt. Bloody lines ran from his broken eardrums, trickling down his cheeks and neck. The two soldiers dropped him to the ground and returned to search the hole. Jim and I pressed forward with Alpha team, operating on the southern edge of the sweep.

Everyone worked in pairs, one man standing ready to suppress enemy fire with his M16, while the other man tossed the grenade. Ahead of us lay an embankment that housed a series of bunkers. Jim pointed to the closest bunker at the end of the berm, and I nodded, leveling my M16 at the dark entrance. We moved up to the bare embankment. Jim held the fragmentation grenade slightly behind him, like a pitcher ready to throw a strike. Once again we stood at the edge of a dark bunker, and Jim hurled the grenade into the hole.

The next few seconds passed in slow motion. As the frag left Jim’s hand, the spoon flipped into the air, arming the grenade. Then, as we watched in disbelief, the hand grenade bounced off a thick tree root growing across the hole, and sprang back at us waist-high, like it had been thrown it against a trampoline. With the internal fuse half-cooked, the live grenade landed in the dirt, right under our feet. In a wild panic, we spun around and ran two or three steps, then dove down the embankment with the fragmentation grenade rolling and bouncing along behind us. A long heartbeat later, the ear-splitting concussion slammed into my back, hurling me forward in a confusing tumble. The sky spun and my face smashed against the ground in a strangely painless moment. I lay sprawled out on my stomach, hanging onto consciousness—I could hear someone screaming—I felt my legs and back for blood, but it wasn’t me. I recovered my equilibrium, and scrambled over to Jim on my hands and knees.

“My legs! My legs! Aaaaaaah!” he screamed. He lay on his side in a fetal position, holding the back of his blood-red thighs. “Aaaaaaah! Help me! My legs. Oh God, Oh God, it hurts!” I rolled him over on his stomach, and unsheathed my commando knife. Wally rushed over and tore at his first aid packet, as I ran the sharp blade up the back of Jim’s fatigues, and began cutting off his trouser legs. The battalion medics slid up beside us and immediately took over.

“How bad is it? Are they still there?” Jim trembled. The medics flung the shredded cloth aside, revealing his bleeding, shaking legs. The shrapnel had ripped his flesh open, exposing the meat of his muscles, his tendons, and leg bone. “Aaaaaaaaah!” he agonized, as the pain increased. One of the medics stabbed a sharp needle deep into the side of Jim’s thigh above the wound, then squeezed hard against the sides of the small metal tube, forcing the numbing narcotic into his bloodstream. Jim moaned in relief, “Thank you God, thank you. Are my feet there? Can I walk?” he mumbled from the narcotic fog.

“Yeah brother. You’re OK. Your feet are still there,” I said, as the medics wrapped the gauze bandages around his thighs. The blood soaked through quickly, saturating the white bandages with scarlet. We rolled him onto his back so they could splint his legs. Bobby Colston raced up beside us.

“I called for a Medivac! It’s coming in now!” he yelled.

Jim’s head rolled to the side loosely. The morphine kicked in full strength and he was drifting into unconsciousness.

“Forget the splints, we don’t have time, just wrap his legs tightly together with more gauze!” a medic ordered, as the dustoff ship descended into the bare clearing. The Medics jumped out and ran over. We rolled Jim carefully onto the canvas stretcher, then hoisted him up, and ran back under the rotor blast to load him aboard the waiting chopper.

“This is your ticket home, Jim. You’ll be dancing the jig in a week,” I said, as we pushed him in. He smiled faintly and we backed away as the Huey lifted off.

I headed back to the berm to find my rifle, feeling the strength drain from Alpha team. Strength we could ill afford to lose. I’d arrived in Vietnam with ten men. Now there were only three: John Knaus, Sonny Reynaga, and myself. Our vulnerability had grown, there was no more safety in numbers or comfort we could take from a ten-fold bond. We had vowed silently to watch out for each other, to protect one other until we all could make it safely home. Instead, we were being picked off one at a time. Any protection John, Sonny, and I could offer each other now, was paper thin. There was no way the three of us could stand against the forces that circled us, the forces that had broken our band of friends and left the three of us standing like fragile, cracked pieces of china. We were fighting more than the North Vietnamese, and even more than the Dragon. We were fighting fate.

I picked up my M16 and stood without purpose in the middle of the chaos around me, staring straight ahead but seeing nothing, with my emotions short-circuited and unable to catch up with my thoughts. The reaper of souls was in full harvest, and I had just felt his sharp scythe sweep past and cut Jim down. Now I was standing alone, on the inside edge of the tall grass, knowing he was coming back for another pass.